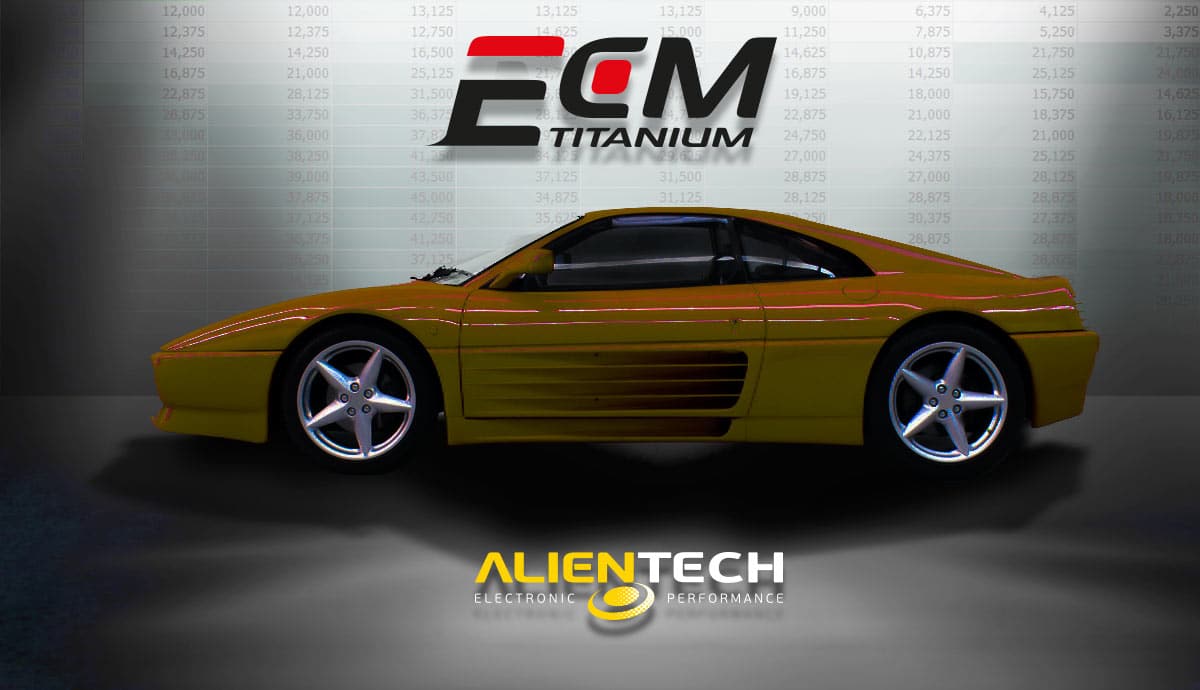 Posted at 13:07h in Tech Deepening by Alientech

Today, our Driver Development Team will introduce you a series of driver updates concerning not-so-recent gasoline cars, which are still much widespread and very interesting on the chiptuning point of view.
We decided to consider the oldest drivers and update them with new maps and correct conversion formulae, thus providing tuners with the capability to carry out the best possible chiptuning.

Here is a short list of the concerned vehicles and the ECUs mounted on-board:

Let’s now take some of them into consideration by examining the maps found inside their drivers. 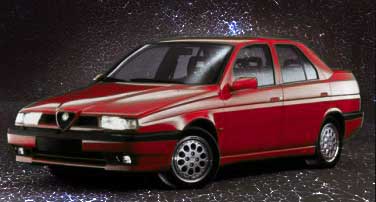 Manufactured since 1992, the Q4 version features an all-wheel drive, a 2000 turbo engine with 16-valve twin-shaft timing and a cast-iron crankcase deriving directly from Lancia Delta Integrale. The all-wheel drive is permanent, characterized by a front open differential, central viscous coupling and rear Torsen self-locking differential. This engine supplies 190PS at 6000rpm and 297Nm at 2900rpm. It allows an acceleration from 0 to 100km/h in 7 seconds and reaches a maximum speed of 225km/h.

The ECU is a Magneti Marelli IAW 4W6 model with an Eprom 27C256 that can be read with an Eprom reader.
These are the main maps found on the recently-updated driver: 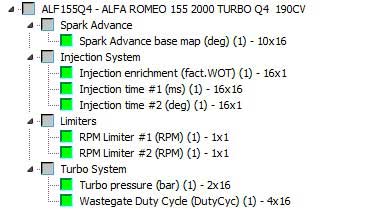 This map represents the engine advance used in a normal vehicle’s functioning state, according to the engine RPM and the load/pressure value expressed in bars; the map is expressed in degrees.

It controls fuel injection enrichment by WOT (wide open throttle). It is expressed in factor WOT. 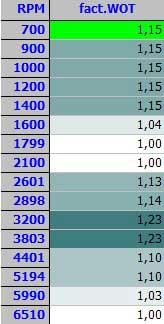 This map controls the injectors opening times and, therefore, the quantity of fuel injected. It is expressed in milliseconds (ms) and works like the Spark Advance map according to the engine RPM and the load/pressure expressed in bars.

It manages turbo pressure, which is obtained through the opening/closing of the Pierburg (wastegate) valve. It depends on the engine RPM and the TPS degrees.

There are two RPM Limiter maps: the highest map describes the revolutions at which the injection cuts off and a second map (lower) indicating when the injection doesn’t cut off any longer.

The 325i versions are fitted with two different types of engine:

Our driver relates to the M50B25TU version fitted with Vanos. The ECU is a Bosch M3.1 with an Eprom 27C512 that can be read with an Eprom reader.

Here are the new maps: 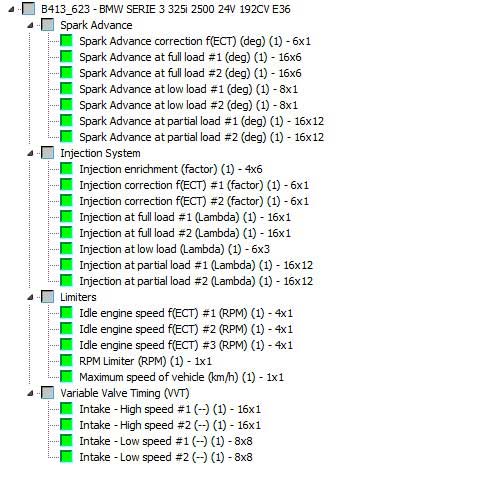 This map represents the engine advance when full-load conditions (max acceleration) occur, according to the engine RPM and load. The map is expressed in degrees.

It expresses the advance correction in degrees according to the engine coolant temperature.

Expressed in Lambda, according to load and engine rpm, it represents the injection at partial load. As you can see on the table, when load and rpm increase, the Lambda value decreases, hence the mix will be greasier.

Then we have the map relating to RPM limiters and maximum reachable speed. 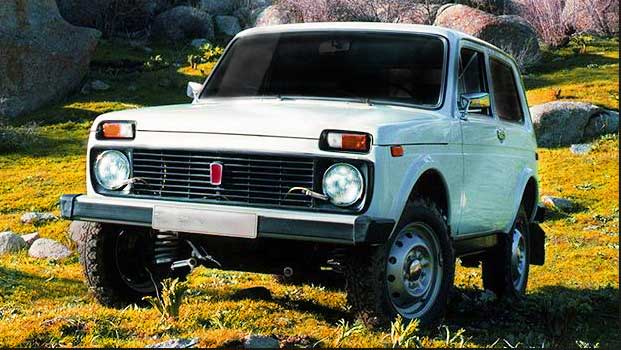 Produced since 1977, it has undergone some restyling and only a small modernization process over the years. The Niva project was very innovative for its time because it came to combine the features typical of the current Sports Utility Vehicles category (though its body is a traditional off-road one), and the permanent all-wheel drive obtained with a central differential with features typical of pure offroaders (low range gears, rigid rear axle, manual and total block of the third differential, remarkable wheel angles, very short wheelbase), added to the absolute peculiarity of the independence of the gearbox-differential lock system, so as to allow the use of low range gears even without blocking the differential and vice versa, thus ensuring the maximum directionality possible. Today, this solution can be boasted by very few off-road vehicles (Land Rover, Toyota Land Cruiser and Mercedes-Benz G-Class).

Still today the Niva is chosen in over 150 countries not only for its outstanding robustness and simple design: everything is still strictly manual, to the advantage of reliability and ease of maintenance and repair, while there are no electronic interferences, for maximum driving pleasure; but it is also chosen for its versatility of use: a true off-road featuring, however, the body of a utility car and a clearly superior interior space compared to its closest competitors.

Currently, the historical brand ‘Niva’ has been sold to Chevrolet (GM Group), while the classic Niva model is today still manufactured under the name of Lada 4×4 for northern European markets, while in the rest of Europe the car has kept its name Niva.

Here are the new maps of the updated driver: 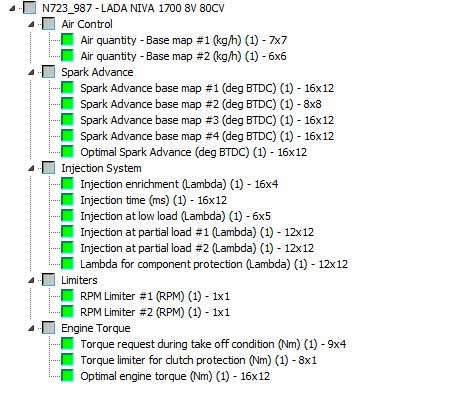 This map represents the engine advance limit, or the maximum advance values that a specific engine can reach to prevent any damage; it is expressed in degrees before TDC and at low revs and high load values this map may present some negative values meaning delays.

Expressed in Lambda, according to injectors opening times in ms and engine revolutions, it represents the injection at partial load.

This map represents the optimum torque that should be reached by the engine according to injectors opening times in ms and engine revolutions. 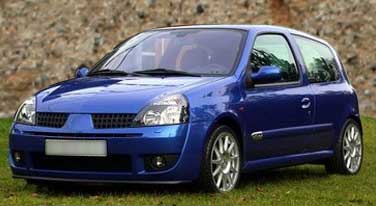 This variant of the F4R engine is the only F4R unit to remain anchored to the dictates of the previous “Source” engines, since it is the only F4R engine equipped with a cast iron base. In fact, it is an evolution of the F7R engine. The latter was revised in terms of manifolds, both intake and exhaust, cylinder head and distribution, with new timing parameters. Such valve timing was already variable on the intake side thanks to the new phase variator. In addition, the valves are made of a new alloy, more resistant to higher stresses and spark plugs are equipped with a platinum electrode.

The ECU mounted is a Siemens Sirius 32 that you can read with KESSv2 protocol 34 and KTAG protocol 336. There is an Eprom 29F200 that can be read with an Eprom reader. 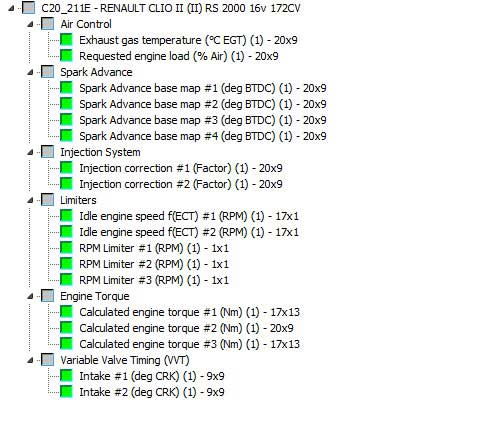 In this case too, one of the most important maps is the advance base map. This map represents the engine advance used in a normal vehicle’s functioning state, according to the engine RPM and the load/pressure value expressed in bars; the unit of measure of the map is expressed in BTDC degrees. As you can notice, the mbar axis fully reaches the atmospheric pressure because the car is not a turbo one.

It expresses the temperature of exhaust gases allowed according to RPM and pressure.

Then you will find the minimum RPM according to the engine coolant temperature. 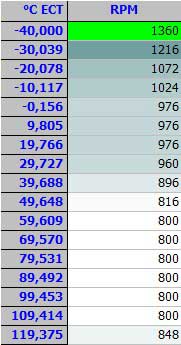 There are also the variable spark timing maps depending on the engine RPM and pressure in mbar.