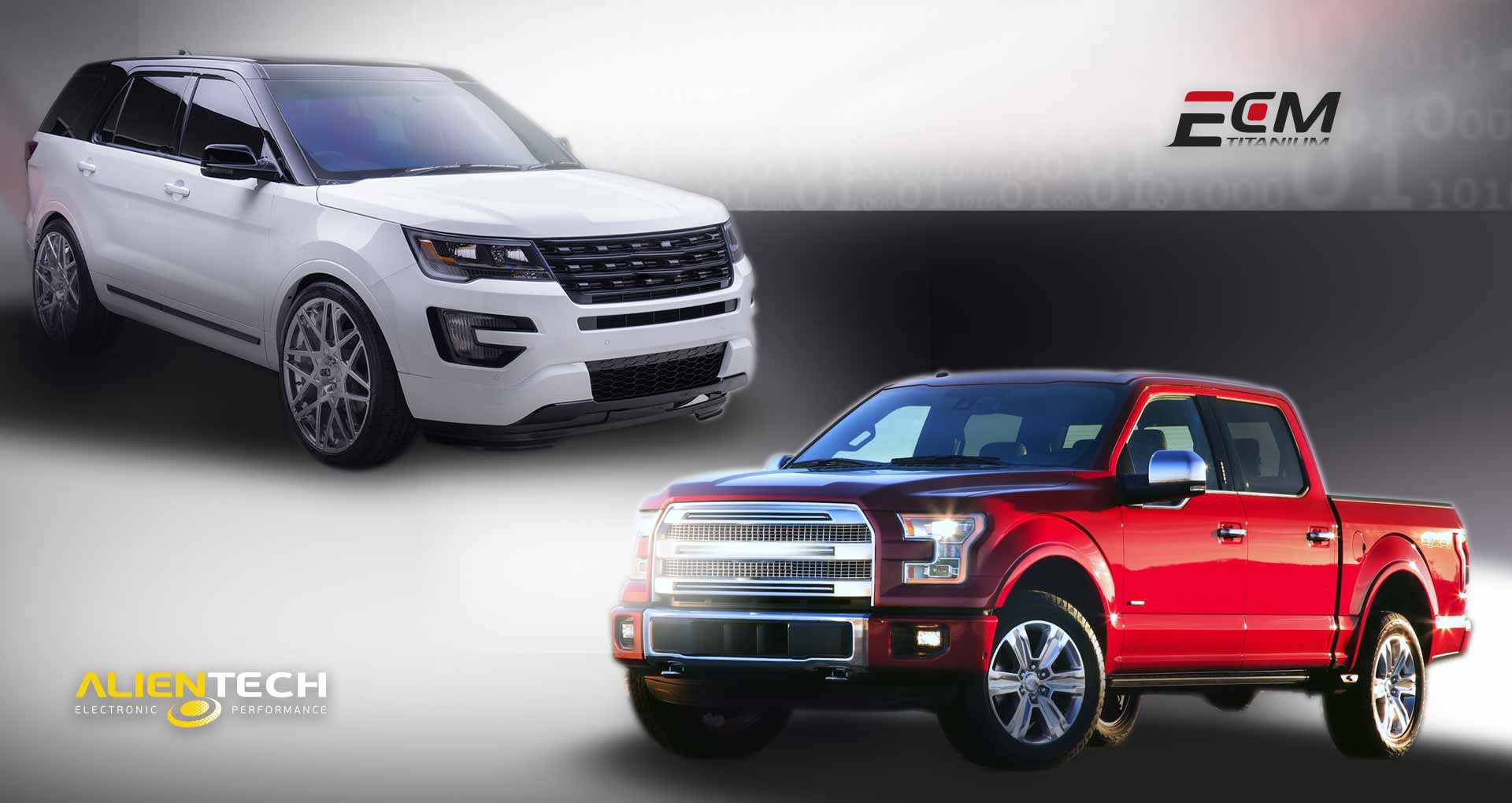 Posted at 08:22h in Tech Deepening by Alientech

Let’s go on with the presentation of the new drivers available for ECM Titanium. This time we will deal with the 3.5 L Ford gasoline turbocharged motor and with the Bosch MEDG17 electronics that controls it. Yes, it’s true, this motor is not accessible to everyone, but please remember that EcoBoost motors go from the 1.0L, 1.5L, 1.6L, 2.0L, 2.3L, 2.7L compact and versatile version up to the 3.5L that we will present today. Being familiar with the EcoBoost technology will allow you to better understand all the new Ford engines and related drivers.

It’s a SUV… a wonderful and big SUV! For those who like the category, of course! For many aspects, it is similar to its cousin Lincoln Navigator, even though it doesn’t feature the same comfortable and expansive Lincoln’s optionals.

The 3.5L engine is only available for the Sport and Platinum versions.

Among the “light and medium-duty trucks”, the F-150 is the world’s most popular and widespread Ford product. 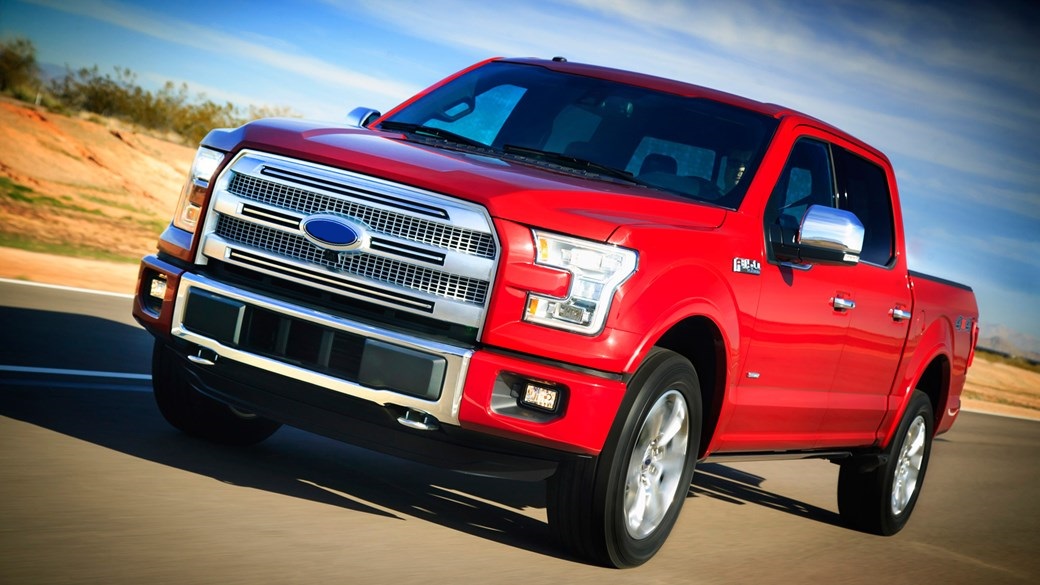 The 3.5L engine is available for all the F-150 versions. XL, XLT, LARIAT, Raptor, KingRanch, Platinum and Limited.

The engine has been developed starting from the 3.5L Ti-VCT Duratec 35 aspirated version (Ford Cyclone V6 family), but in the EcoBoost version you can find a Twin-Scroll turbo compressor and direct gasoline injection, while timing remains variable. Both systems are controlled by a Bosch MEDG17.0 central unit.

The high-pressure fuel is directly injected inside the combustion chamber of each cylinder. The advantages include a more accurate fuel supply that reduces emissions, an improved volumetric efficiency, a significant reduction in the eventual knock sensor for better engine performance and decreased fuel consumption.

Through this system, the exhaust gases flow from the two manifolds of the V6 engine to the turbine and the kinetic energy generated by the rotation speed of the shaft spreads the rotation to the compressor, increasing the aspirated air pressure. Nobody wants “turbo-lag”! For this reason, Ford has decided to first use the Twin-Scroll Turbo configuration on the 2.7L EcoBoost engine, but the TT technology is not just suitable for muscle-cars. The restyled Ford 3.5L F-150 MY2015 is a valid example. In fact, thanks to this engine, the F-150 truck has been evaluated as the “best of the 12200 lb class” in terms of towing.

How to read the control unit?

Alientech offers you two opportunities: working from OBDII with KessV2 or opening the ECU and connecting K-TAG.

When lifting the bonnet, first remove the plastic engine cover. The control unit is located exactly on the engine.

When lifting the bonnet, the central unit is found on the left of the engine, near the battery (in front of the front passenger’s seat) Simply to find, isn’t it?

Here after you can find some pictures of the opened control unit, where the TriCore TC1797 micro is located. You can see that it is not complicated to be opened compared to a MED17 T-PROT BMW, for example.

Now we will show you an example of an ECM Titanium driver and the related maps we found for a FORD EXPLORER (VI) 3.5L V6 EcoBoost TT 370PS.

As you have surely noticed, there are all the most important map categories to manage the engine performance. Please, don’t forget that the Explorer and F-150’s Bosch MEDG17 central unit is similar to the one mounted on the new 1.5L EcoBoost (New Mondeo) and 2.3L EcoBoost (Mustang e Focus RS). The maps show the same units of measurement, that are:

Let’s now concentrate on the most important maps you can modify to increase power.

As a consequence, the maximum engine torque value (474 Nm) shown on the map is related to the an ideal atmospheric pressure of 1000 hPa.

Let’s now compare this map’s values with the next limiter.

The following is a simple limiter depending on the motor RPM and on the percentage position of the accelerator pedal [% Acc]. You can notice that the maximum value of 474 Nm is identical to the previous map.

Hence, you need to modify both maps (percentage or absolute value) entering the same maximum value on both maps in order to prevent Bosch ECU diagnosis to identify an error in the calculation of the torque found in the central unit.

Have you ever wondered which strategy is used by the ECU calibrators to choose the correct injection value to protect the engine? One of the essential parameters is the Engine Coolant Temperature (ECT).

At 180°F (around 82°C) the ECU uses the map values to manage fuel enrichment to protect the engine functioning. This strategy can be extended to other systems, such as the turbo.

Although values don’t seem so true (500°F are around 230°C) this map is used by the ECU to limit the motor charge generated by the turbo system.

It is always fundamental to understand the meaning of this map, because it’s always the most risky to be modified, if not correctly elaborated.

On the 3D ECM Titanium view you can see that the three-dimensional structure of the map is really consistent, without variations (“peaks” or “gaps”) that could provoke a knocking or a gap in the engine performance.

After modifying the map, we suggest to open the 3D view to verify there are no anomalies in its shape.

Other vehicles fitted with the EcoBoost TT 3.5L engine:

In 2010, Ford had already used the 3.5L EcoBoost engine for the most powerful version of Taurus: SHO. Performance was equal than in Ford Explorer, but in that period they mounted the Bosch MEDG9.8.1 ECU (still equipped with a Motorola Micro BDM MPC5xxx). Taurus SHO has long been fitted with K-TAG (#279).

“…in the next future”

Hopefully it will be fitted with the same ECU!