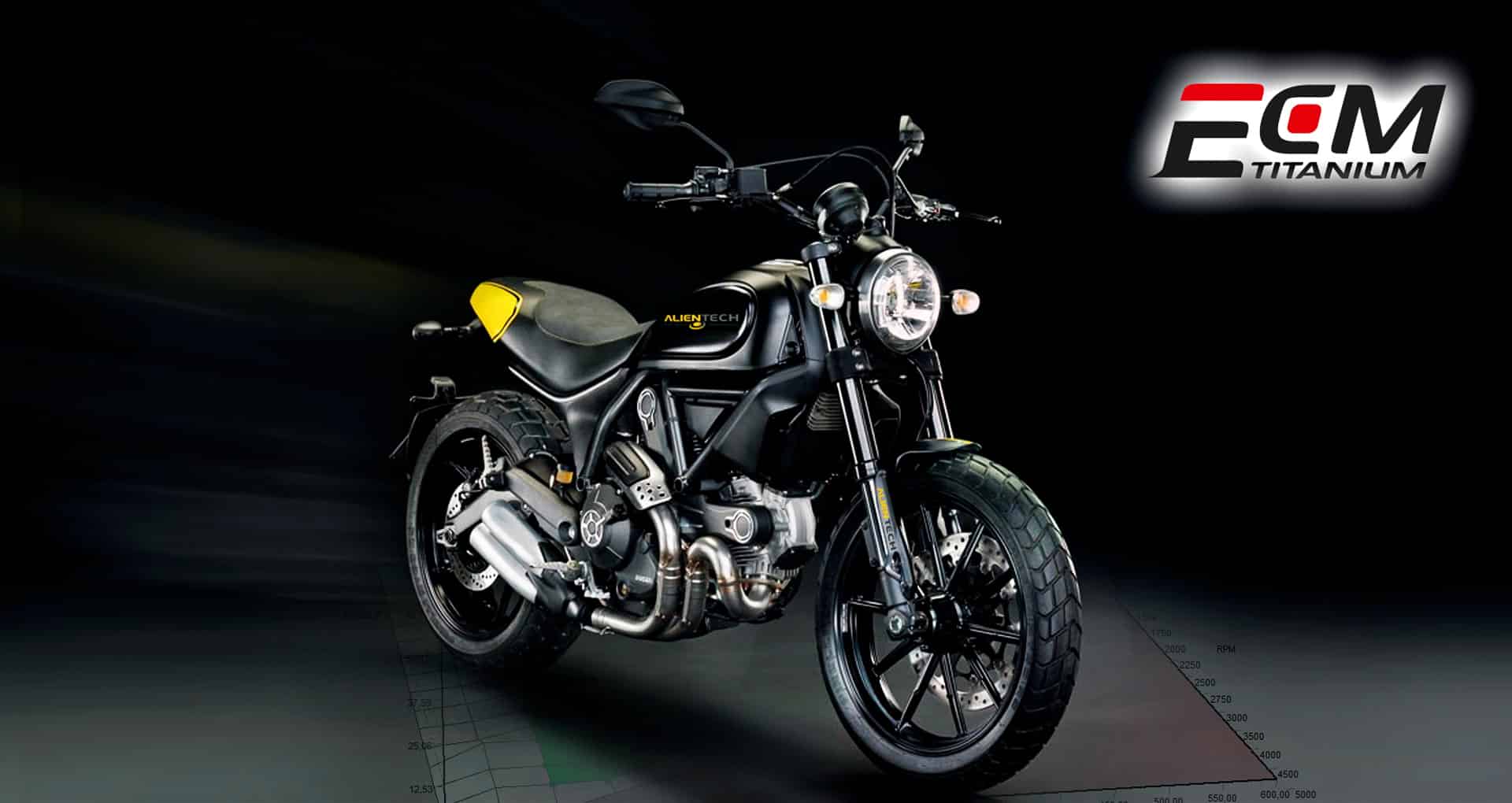 Posted at 08:17h in Tech Deepening by Alientech

Today we present the fascinating and multifaceted world of the two wheels. Who chooses to have a motorcycle, wishes to get the best from it because being a motorcyclist is a state of mind, a way of being. The road is not only a strip of asphalt, but a breeding ground for emotions, for life. Many of our technicians are also motorcyclists and for this reason, we also want to give space to this study on a model of Ducati: Scrambler 803cc 74 HP.

Scrambler by Ducati is a historical model of the Ducati brand; production of the first series started in 1962 and terminated in 1976 with 125, 250, 350 and 450cc cylinder capacities. After about 40 years, Ducati has decided to revive the Scrambler project and create a totally new motorcycle which could also adhere to the scrambler concept of its “ancestor”. (Ducati Scrambler 1962).

Scrambler is not only the name of a motorcycle model, it represents a philosophy and is derived from the English verb “to scramble” which means mixing. Scrambler was the name of road motorcycles provided with handlebars, tires and off-road ratios, in order to easily drive on long dirt roads connecting American “ranches” to public ways.

In fact, the Scrambler model by Ducati was mainly designed for the American market. The reasons for the commercial success of Scrambler were manifold. First, it had an exceptional frame (it was even used for track racing, which is probably unprecedented in motorbike history), and an engine perfectly suited for its function. It was not the fastest bike of its days, but its general performance and absolutely centered riding position, made it one of the most delightful motorcycles of the era. It was also extremely stylish: rounded lines, simultaneously classical and modern, and bright colors contrasting the black running gear and chrome tank.

The Scrambler was universally considered a balance between the American and the European schools of motorcycling. It was an extremely fashionable bike, and remains popular today.

The new Scrambler is powered by a L-Twin, Desmodromic, air cooled engine with 2 valves per cylinder, that cranks out a maximum output of 74HP at 8250rpm and 68Nm at 5750rpm.

In Desmodromic distribution the spring compressing the valve by closing the cylinder opening is removed, and replaced by a complex mechanisms provided with two small arms (leverages) which are connected to the camshaft which, in addition to the usual lobe cam, features a complementary cam, controlling the valve opening and closing.

The current system also uses a spring that actuates on the rocker arm closing the valve, so as to allow the poppet valve to perfectly close.

The benefits of this system are varied:

How to read and where to find the control unit?

Technical data of the control unit

The ECU can be read with K-TAG by using protocol 341 and direct connection, this is the material needed:

It is also possible to read and write using the KESSv2 with protocol 273, employing the 144300K244 cable. To obtain the original file, just enter the original spares request form in the specific section on our databank:

It allows the engine to stop the closed loop function (when the injection is regulated to keep lambda =1), thus injecting more gasoline by high engine revolutions and load. The map depends on the engine RPM and the air percentage.

This map represents the ideal percentage of air entering the engine, depending on the engine rev number and mBar pressure measured by the MAP inside the collector.

This switch enables to deactivate the lambda feeler.

It is also possible to change the temperature of activation of the fan for cooling.

This map enables to break the revolution axis. It is recommended doing this in case of increasing the rpm limiter map.