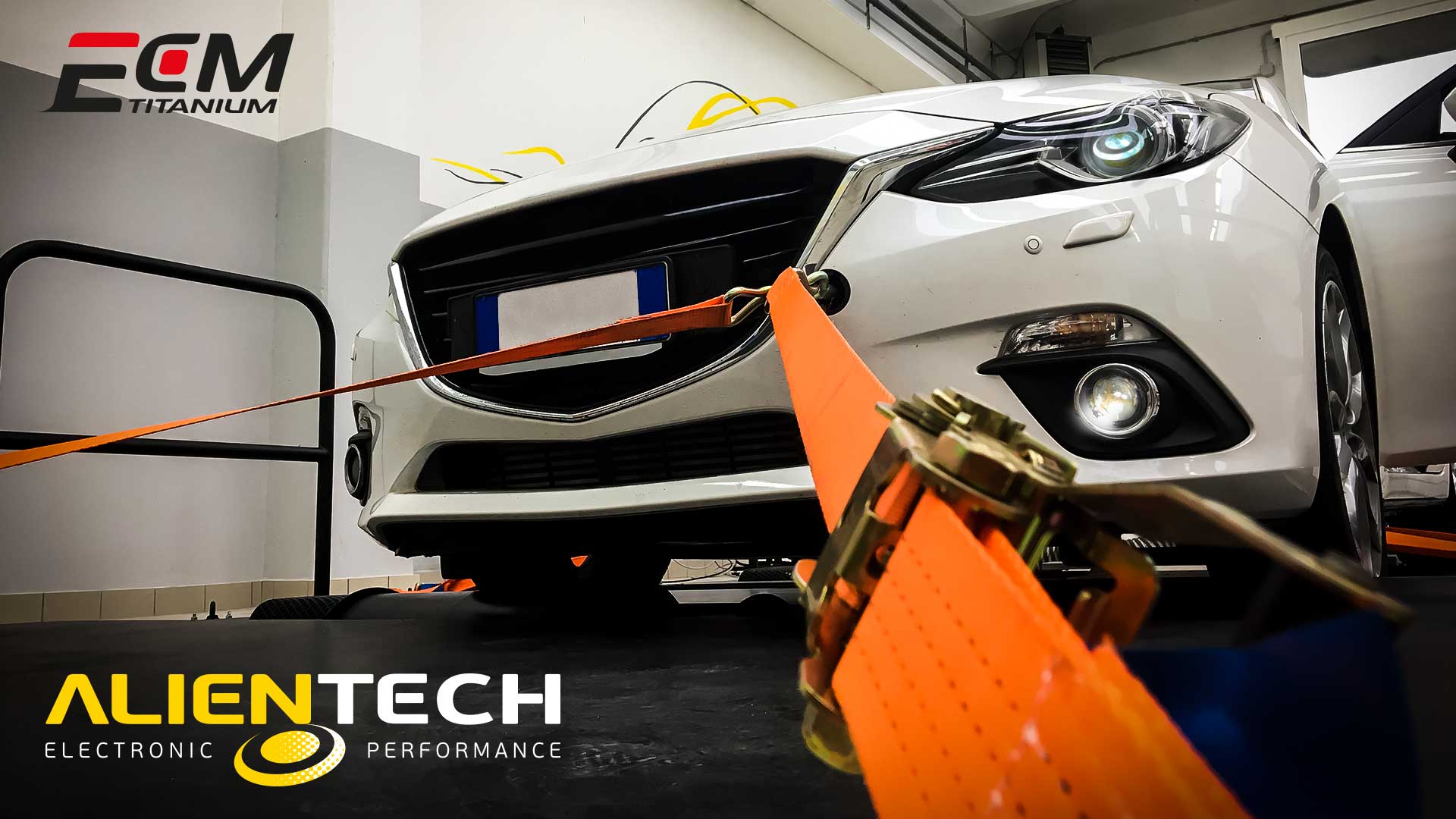 Posted at 07:58h in Tech Deepening by Alientech

Mazda 3 was created in 2003 to replace Mazda 323. It shows a completely different design from the 323 version, studied in California and reviewed by the Japanese centre. The platform on which it was initially developed was studied by Ford and was also used by Focus, Volvo S40 and V50.

This Japanese car made in Hofu proved to be very successful in Asia and America, while in Europe the big German rivals (VW Golf and Ford Focus) have got the better on sales.

In the second series of Mazda, the 2.2 L MZD-CD engine is also presented in two power versions: 150CV and 185CV.

The third generation (that one at issue) was presented in June 2013, after the separation from Ford, so allowing Mazda to have “free rein” and to design again the car from scratch, thus adopting gasoline and diesel engines directly made “in-house”. The platform was also replaced by a version made by “Skyactive”. All these details convert Mazda 3 into a strong and reliable version with a very appealing design.

Different versions have been manufactured for the third series, which is available in the Gasoline and Diesel variants, also equipped with automatic shifting gearbox:

The CD150 Euro 6 Diesel engine with DPF is also shared, in different versions, with the older sisters: Mazda 6 and Mazda CX-5.

Below are some of the main characteristics of Mazda 3

Composition of the Frame and Characteristics of the Skyactive Innovation: following the end of the partnership with Ford, Mazda has focused on the reduction of weights and has introduced innovative solutions, such as the Skyactive frame based on efficiency – a platform with a limited weight that enables to make lighter, stronger and safer vehicles up to (1800Mpa), thus increasing the sporty driving pleasure. The new bodywork weighs 8% less, while the frame 14% less compared to the second series. High-resistance steel materials have been implemented for this bodywork in order to increase sturdiness and reduce weights.

But for the frame, the main target was to combine low- and medium-speed agility with high-speed stability. To do this, the company has developed a new steering system equipped with electric control, and capable of providing an immediate response at low and medium speeds. On the contrary, a quick response of the steering wheel at low speeds could determine an excessive sensitivity of the vehicle in response to small variations of the steering wheel at high speeds. In order to prevent this phenomenon, Mazda engineers have also reviewed the geometry of suspensions.

Sistema i-ELOOP: since 2012 Mazda has been mounting the i-ELOOP system on its Gasoline cars. The i-ELOOP is the first released energy recovery system using a super condenser in place of the battery and being 10% more efficient. In the Mazda i-ELOOP, the super condenser does not only feed the starter motor (in all other versions, that is its only use) but also the conditioning, audio and many other systems, directly storing the energy from the alternator and this translates into a greater accumulation of energy in a quicker way. One of the limits of the AGM battery and all batteries in general is in fact represented by the reduced speed of storage and delivery of energy. Vice-versa, super-capacitors accept much quicker and more numerous cycles. Thanks to this system, Mazda can use a more powerful alternator with a greater voltage range of 12 to 25 Volts to recover a major quantity of kinetic energy. By using the i-ELOOP it is also possible to access the advanced start&stop system, called i-stop, which can extend the engine-off periods, anticipating release times and delaying the restart in the most adverse weather conditions.

Safety systems: in addition to being performing, Mazda 3 is also very safe. In fact, its equipment enables to rectify “distraction errors” during driving. Among the most important are the automatic urban emergency braking system (SCBS), and the vehicle monitoring system (RVM) that reports the presence of vehicles behind or next to your car, including those in the blind spot. The fully equipped version also includes the i-Activsense device that protects against lane departure (LDWS), and enables to maintain the correct safety distance thanks to the adaptive cruise control (MRCC) and finally to always have the correct lighting level thanks to adaptive front lighting (AFS) with automatic headlights turn-on/off depending on traffic (HBC).

Natural Sound Smoother: this system literally “lessens” engine vibrations as it mounts a dynamic shock absorber inside the pin that joins the piston to the rod. It can work in contrast to the engine vibration, thus reducing that tiresome ticking of diesel engines and making it appear as silent as a gasoline engine.

Where to find the control unit?

How to read it:

With the tool KESSv2 and the car/bike activation, family MAZDA DIESEL DENSO RENESAS SH725X MY2015 CAN- 535, it is possible to identify, read and write ECU using the OBD connector.

The ECU can be read using the connection via the OBD port:

Let’s now analyse the main maps available in the driver:

This map is used by the ECU as a calibration as it shows the quantity of fuel injected depending on the number of engine revolutions and pressed pedal %. By increasing these values, the quantity of injected fuel and accordingly the vehicle performance can be increased.

This limiter shows the maximum value of fuel that you can inject per every cycle, depending on the number of revolutions. It is worth observing that the highest values correspond to the maximum torque, and this limitation is lower as revolutions increase.

This map shows the percentage of closing of the impeller vanes inside the turbine, in order to maximize the efficiency; the map uses the quantity of fuel injected and the number of revolutions as reference axes: by increasing the quantity of fuel and the number of revolutions, percentages are progressively lower, because the orientable vanes of the impeller will have a major opening.

These maps are very important in the diesel engine as they regulate the turbo pressure depending on the quantity of fuel injected and the number of engine revolutions. Values expressed are directly in hPa, this makes it possible to always be aware of the effective pressure managed by the turbine. In this case, higher values are in the area of revolutions showing the maximum torque.

The map in issue manages pressure inside the rail flute, on the basis of the number of engine revolutions and the quantity of fuel injected. Maximum values reach 1970 bar: this means that injectors mounted on this vehicle are very performing and resistant.

To complete this “set” of maps, let’s examine one of the most important maps of the file analysed: torque limitation, used by the ECU to protect the engine, as the atmospheric pressure changes. Values are expressed in Nm and by increasing values, the full performance of the engine can be unblocked.