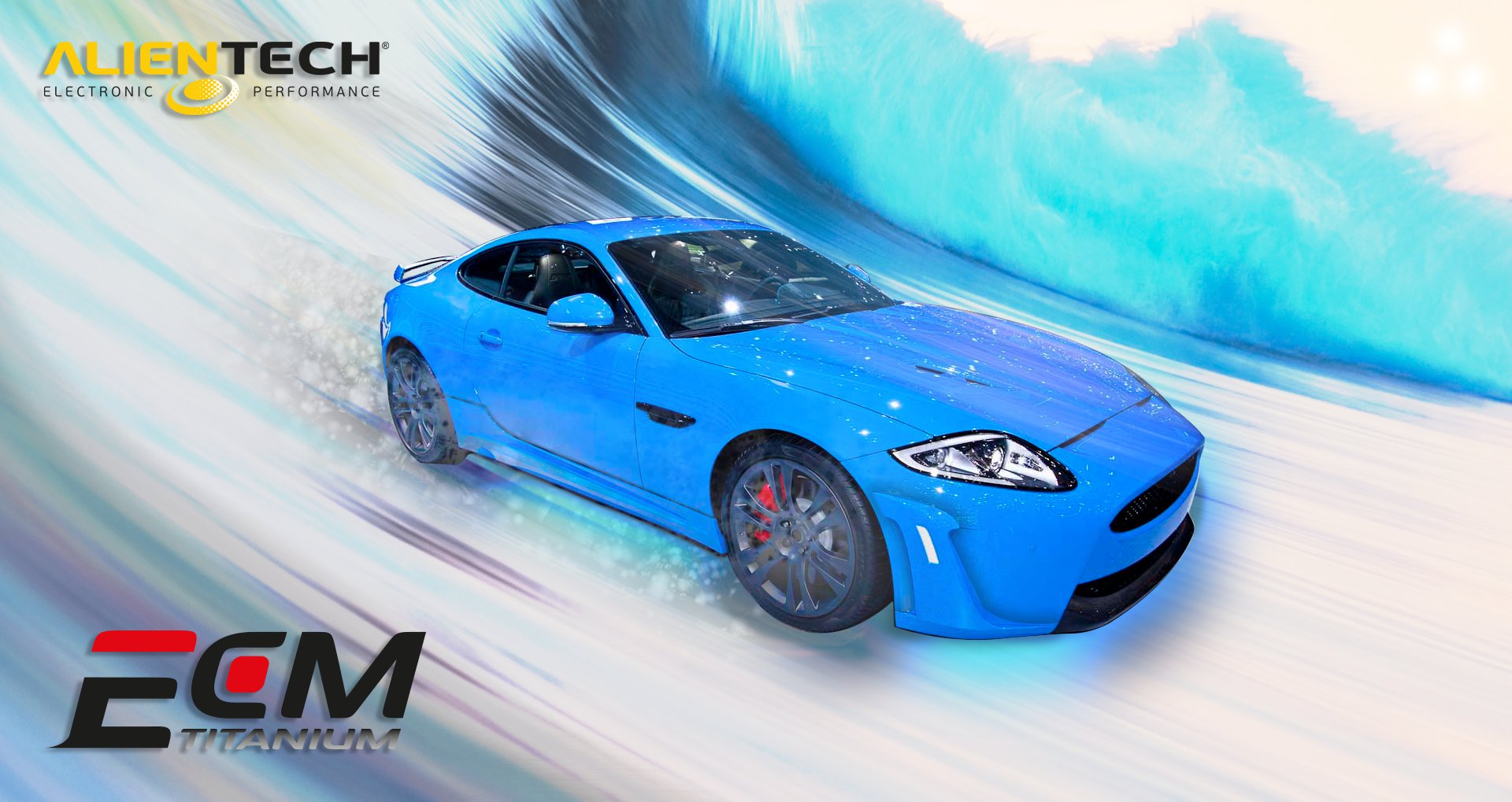 Posted at 08:28h in Tech Deepening by Alientech

Let’s analyze now two samples, one for Jaguar and one for Land Rover.
•              2010 JAGUAR XKR 4200 V8 Supercharged 416CV
•             2009 LAND ROVER RANGE ROVER 4200 V8 Supercharged 390CV
These two vehicles support a 4.2L V8 Supercharged engine, but while Jaguar’s engine code is AJ34S, Land Rover’s is a AJ33S.
AJ33S engine is the supercharged version with the intercooler of the AJ33. Produced from 2002 to replace the 4.0L supercharged engine, it produces 390CV (287kW) at 6100 rpm and a torque of 541Nm at 3500rpm.
It was later updated to AJ34S, including a new VVT. This acronym (Variable Valve Timing) indicates a system supporting a variable timing of the valves and its distribution, that changes according to the revs. Usually you use special features and special camshafts that in particular conditions can modify the valves timing or even close some of them, so to optimise the engine performance and fuel consumption (this means also to reduce emissions)
Another reason you may apply this system is to have different approaches of your engine, according to the number of revs, setting a “soft approach” under a certain amount of revs.
The most common systems of variable valves timing are:
VVT-i and VVT-ie for Toyota, Vtech for Honda, Mivec for Mitsubishi, Vanos and Valve Tronic for BMW, Vct for Ford and Multiair for FIAT
The AJ34S engine produces 416CV (309kW) at 6250rpm and 560Nm torque at 4000rpm.

Analysis on the supercharger.
It was designed to solve the problem of the delay of the turbocompressor; it’s basically an additional compressor directly switched by the engine. This feature allows you to have a good pressure in supercharging condition and so a good torque independently from the revs.
The supercharger is switched on by the crankshaft with a belt or a chain link; in its standard version  it’s formed by a box with two roots that may have different shapes (the typical root is 8 shaped,it  can be constant in all its length or may vary from side to side) and revolve, one activated by a dedicated shaft and the other by a gear, moving one along the other compenetrating.
A good adherence will allow to take a big amount of air from the vent and bring it, already compressed, to the inlet manifold. Thanks to the direct connection with the engine, the supercharger starts working even with low engine revs giving more power and smooth to you drive. But on the other hand, being directly connected to the engine, it expends some power (2CV circa).
Beside the 2 root compressor you may find other kinds of compressors.
•    ‘Volumex’ Compressor
The Volumex is a supercharger patented by Abarth, used as second option to the 2 root compressor on both race and production cars.  Used in the engine of the Lancia Delta S4, supported by KKK turbocompressor was able to provide to such a small engine of 1750 cc a power of 500 hp. The Volumex was previously used on a Lancia Rally 037.
•    Rotary Screw Compressor, or Lysholm Twin Screws Compressor
It is an evolution of the 2 root compressor, where the air stream is progressively and constantly pushed towards the engine. The roots this time are inclined, more flat and closer one to each other looking like the thread of a screw. In this way the air will not flow between the lobes but along them.
•    Vane Compressor
Among all the vane superchargers, the most famous are the Zoller’s and the Centric’s, both based on an eccentric rotor placed on a cylinder. The rotor is equipped with vanes that close alternatively the parts of the cylinder so that the rotor can push the air from one side of the compressor to the other.
In the past another variation was the supercharger with Judson vanes. Its vanes were activated by the centrifugal force of the rotor; the negative aspect was that it constantly needed to be lubricated. A version with an electric engine was also released.
•    Supercharged and Turbo
This is not a new solution, it was first introduced on the Lancia Delta S4 and nowadays AUDI-VW group is considering a reprise.
AUDI-VW group has recently presented a petrol engine (1.4 TSI for 140hp and 185hp) using on the same engine both a turbocharger and a supercharger.
The charger is in link with the crankshaft and working already from 1000 revs so to have a certain torque with a 2000 cm3 too; then, increasing the revs, the turbo intervenes setting a high A/R that will allow great performances.
>> The vehicle we are to analyse supports an Eaton M112 Supercharger Roots. (For this info we thank Paul Busby from Viezu Technologies Limited) 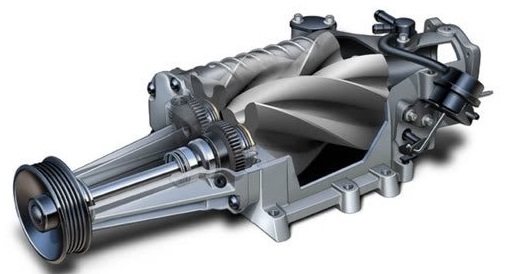 The Ecu is placed in the lower part of the windshield area, just under the panel of the air intake. (For this info we thank Paul Busby from Viezu Technologies Limited) 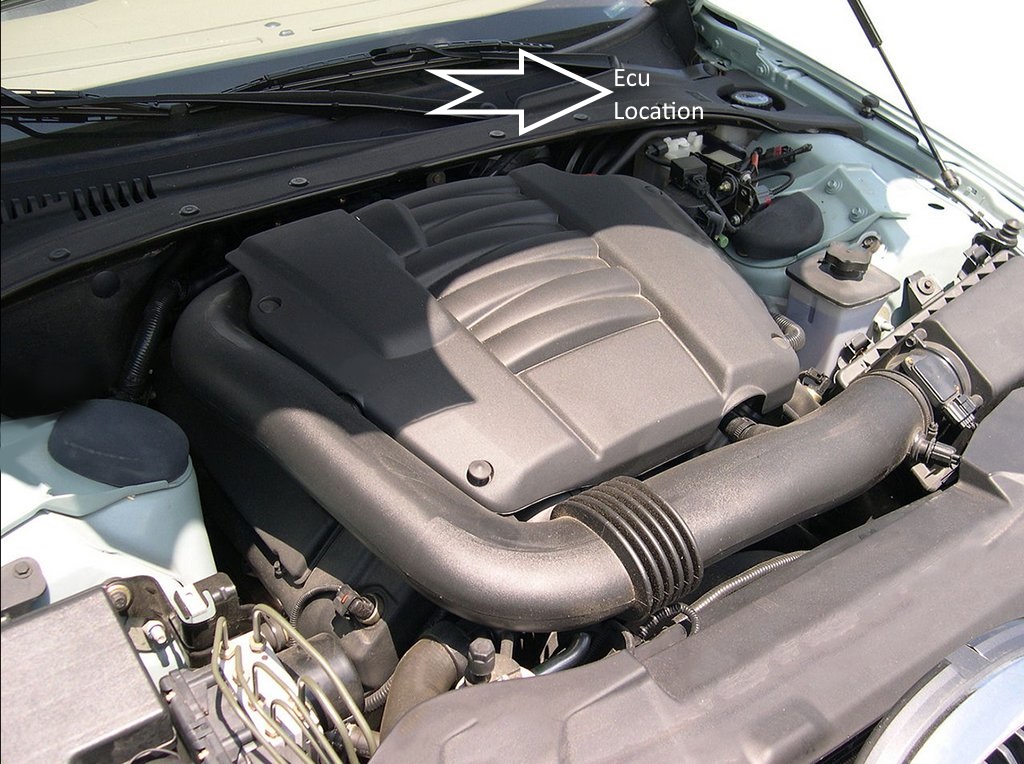 Details of the ECU

What do we need to read the ECU? 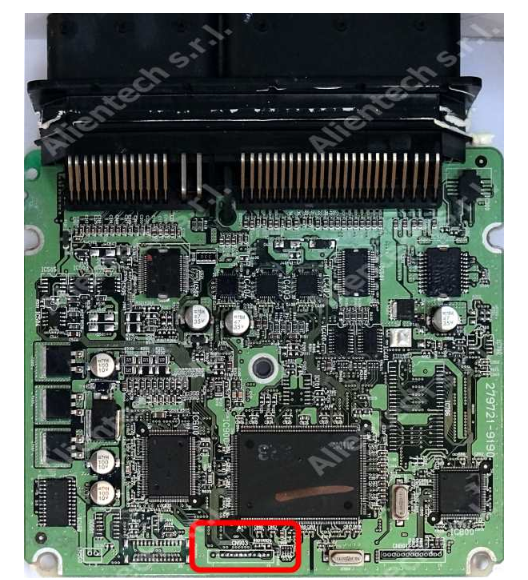 Direct connection
– Cable 14P600KT02
– Flat rainbow cable with16 pins 144300T105
– Soldering wires
To program the ECU it’s necessary to establish connection with both side of it, front and rear. 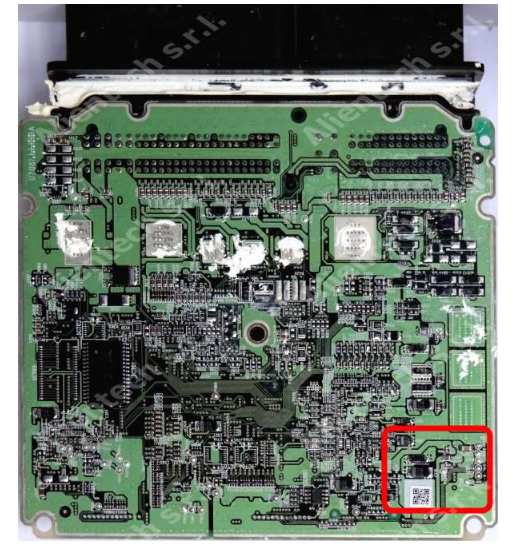 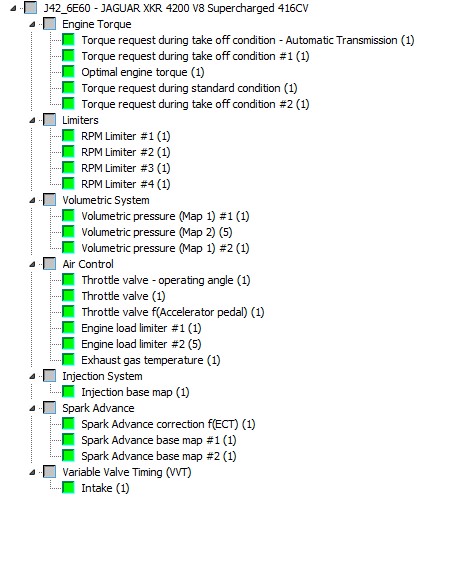 Injection base map.
It allows the engine to get out the “closed loop” mode (it happens when the injection is set to keep  lambda =1), so it enriches the carburation at high revs. The map revolves around the revs and the air load.

Throttle Valve – operating angle
It permits to control the opening of the throttle valve. The strategy that you will apply more often is to make the map smooth and linearized (flattening and smoothing the curve) so to avoid any abrupt and sudden response of the engine, editing it with a 3D view of ECM.
In this case the map displays the grams of air per second and the “pressure ratio”. 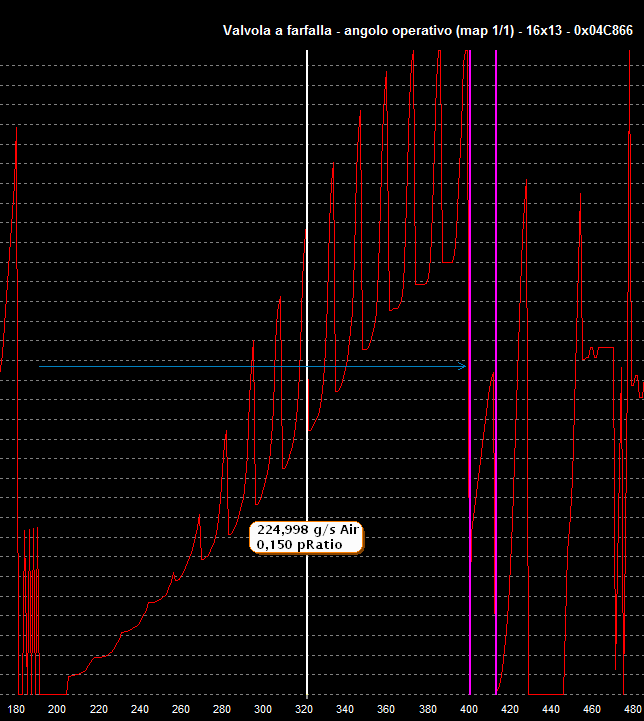 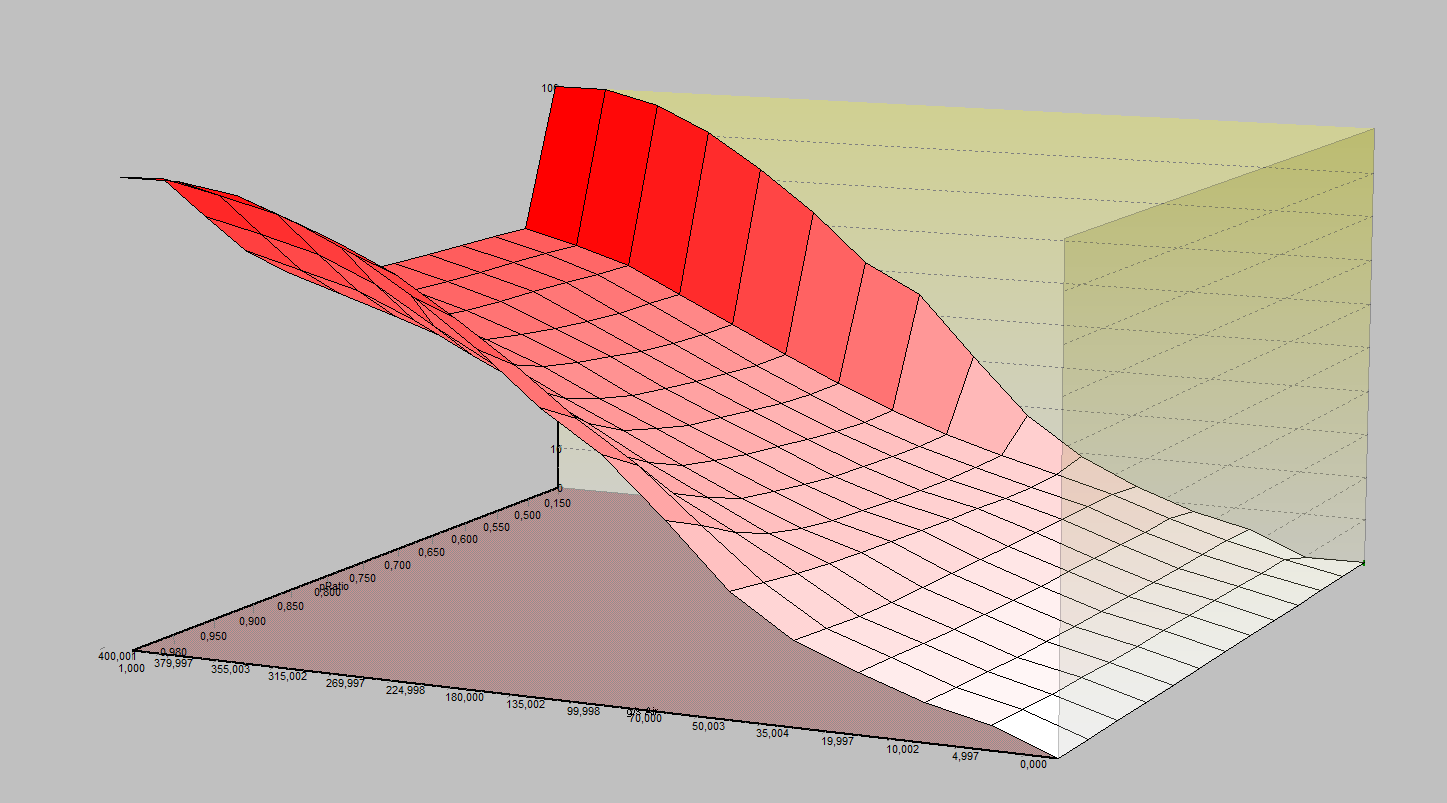 Advance
We added either the map managing the base spark advance or the one dealing with its correction according to the temperature.

This is the map of the base spark advance

And this is the advance correction according to the engine temperature ECT (engine coolant temperature) and revs.

Torque requested during acceleration – Automatic Transmission
You can also find a map of the requested torque related to the automatic transmission. The map is based on revs and percentage of acceleration.

Optimal torque
We now have the map for the optimal torque; as we see in the table, the torque parameters are higher than the ones declared by the manufacturer.
In this map we find almost 700Nm torque while the manufacturer declares 560Nm, this difference of 140Nm circa includes also the loss of torque from the engine to the wheels, due for example to friction. 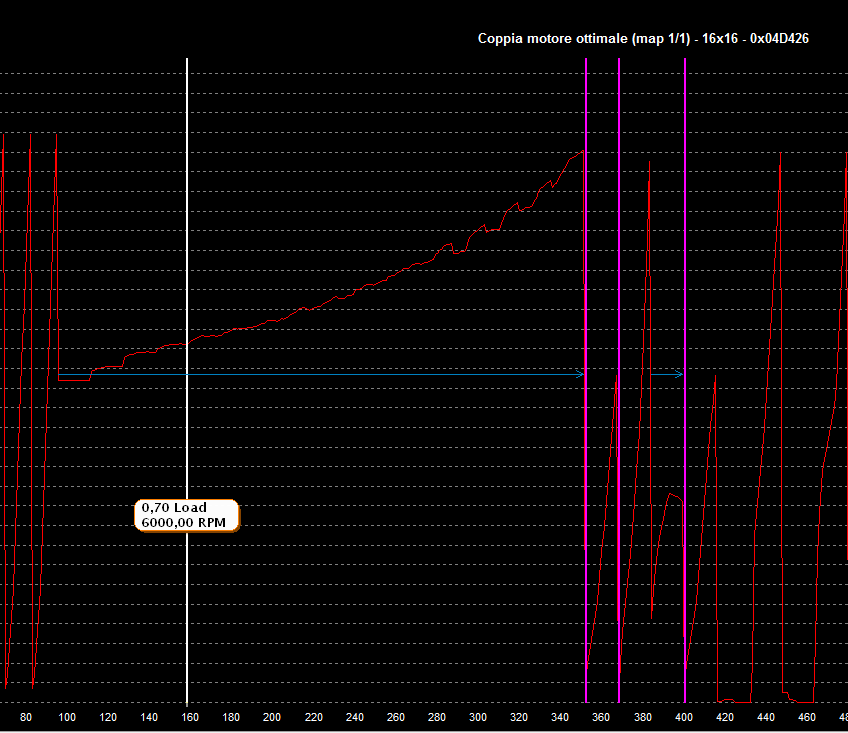 2. Coefficient of volumetric efficiency according to the atmospheric pressure before the supercharging.

3. It’s a kind of limiter to the volume pressure expressed in kPa 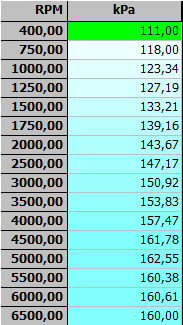 RPM limiters.
We have the revs limiters, 3 of them are single points.

And a fourth one according to the percentage of acceleration. 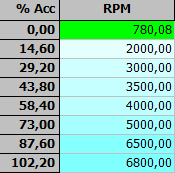