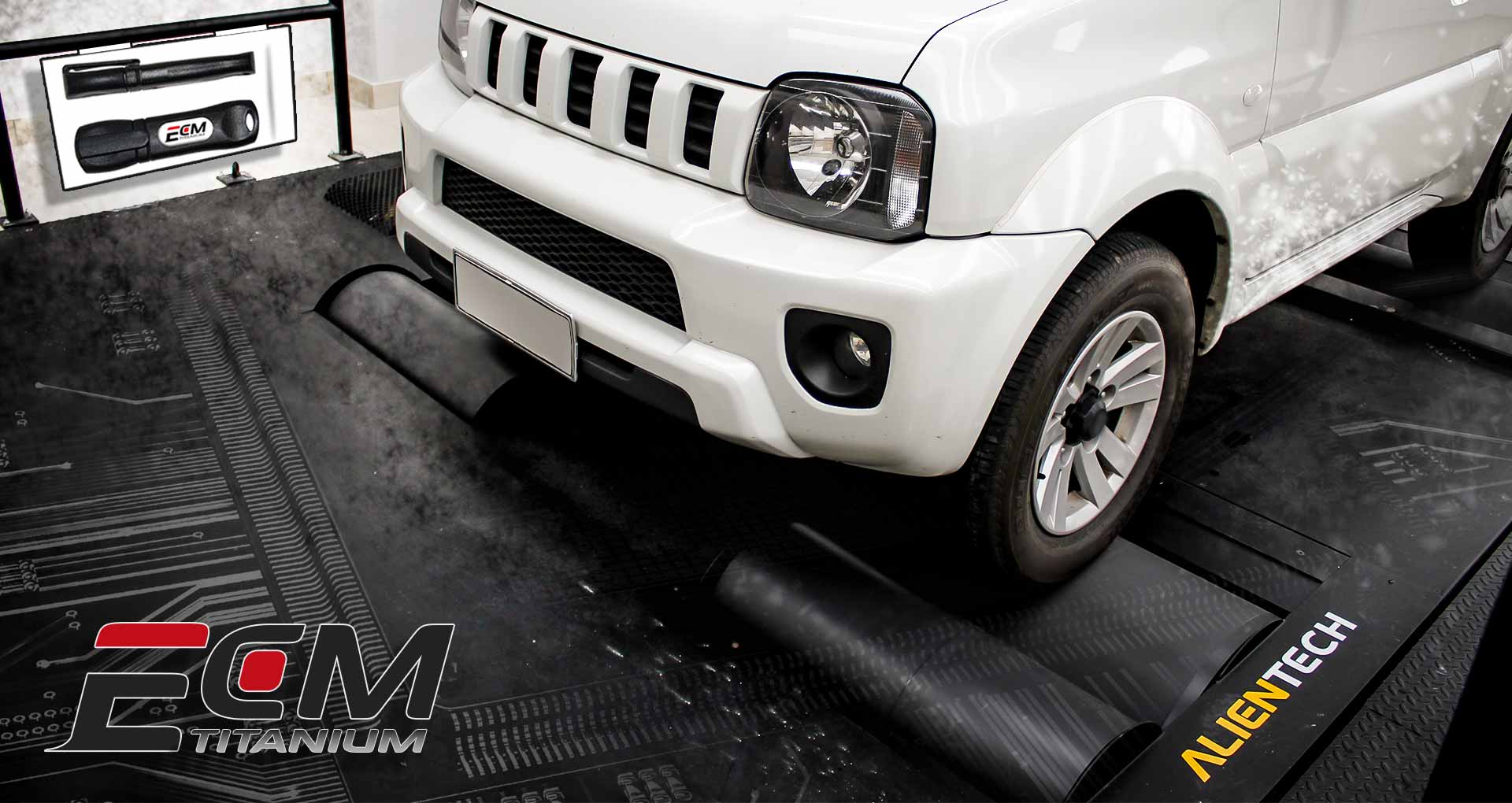 Posted at 08:04h in Tech Deepening by Alientech

This week’s analysis regards a versatile and very funny vehicle: an off-road car, decidedly small compared to those of the same class, but which can provide excellent performance on all types of terrain. You will discover a lot on its story, the features of its engine, traction and suspensions and, of course, a general overview on the new generation driver and the corresponding maps.

The “suzukino” (small Suzuki), as it was called in Italy due to its small dimensions (just exceeding three meters in length), was built on a side-member chassis suitable for off-road driving: in addition to the four driving wheels, the car was originally provided with a reliable leaf spring suspension system, low range gearbox and 16-inch wheels.

The LJ10 (as well as the following LJ20) was used as a civil engineering vehicle at construction sites, as service vehicle for forest patrols and also for goods transport on mountain areas. It was also chosen by those in search of a compact 4×4 car capable of safely face off-road routes during open-air excursions. Since 1998, this vehicle has been sold with the name Jimny and, despite the inevitable evolution (the last update refers to the improvements set forth in the Euro 5 pollution regulation), has never betrayed its origins.

Suzuki Jimny has been created for all terrains. The engine only displaces 1300 cc and develops 85CV. The engine power is smoothly delivered thanks to the specifically designed transmission chain which can reduce frictions, noise and power drops. Road holding is good thanks to the rigid full-width axles, which maximise the tyre/land contact and contribute to ensure the best possible adherence to any surface, even if special tyres are a problem for driveability at a thrust speed; this is a problem that can be easily solved. Vibrations are partially damped by Tri-link suspensions, but the chassis sturdiness transfers a lot of them to the driver.

It is agile on every terrain, also thanks to the high ground clearance and angles of attack, which have been studied for a very aggressive off-road driving. The angle of attack is 34°, with a hump angle of 31° and an exit angle of 46°. A very strong traction and special tyres allow a safe and immediate driving on the most uneven and slippery soil conditions.

Jimny can overcome every obstacle very easily. The sturdy three-section chassis maintains maximum stability on every type of road and reduces impacts in a satisfactory way. An efficient suspension system, ensure us the total exploitation of all peculiarities of an all-wheel drive, and the engagement of low range gearbox makes it possible to deal with the most difficult and steepest climbs without considerable problems.

The change from “2WD” rear traction, suitable for asphalted roads, to “4WD” all-wheel drive, suitable for surfaces with poor adherence or with “4WS L” the low range gearbox, specific for uneven terrains, is possible by pressing the specific button located at the centre of the dashboard. The all-wheel drive can also be activated when on motion, provided that the speed is lower than 100 km/h.

The predecessor of Jimny, that is the Samurai, was equipped with a leaf spring suspension system while the new Jimny comes with a rigid bridge system. Let’s now analyse the main differences.

The elastic body consists of a leaf spring, which was invented – as we know it – by Obadiah Elliot in 1804, and provides a flexing action to elastic (steel) elliptical leaves connected among each other by metal fasteners.

The leaf spring system was the first to be used on motor vehicles, in the beginning it was imported from horse carriages and later gradually modified. Due to its incredible sturdiness, it is still used for heavy vehicles (trucks), but not for cars.

Even if effective, the leaf-spring suspension system is particularly rigid because of its sturdiness but inadequate to resist high speeds in curves and to efficiently dampen the ruggedness of the road.

This is a system where wheels are sturdily connected to each other, thanks to a very resistant unit that usually also incorporates traction axle shafts. This system was one of the first to assert itself, and represents a very reliable solution, especially in those cases in which the vehicle is used to transport heavy weights. The disadvantage of this is that wheels are not independent; therefore, the motion of a wheel affects the status of the other. Its advantages encompass the possibility to check with certainty the wheel displacement geometry (in practice, there are no variations in the characteristic angles with consequent reduced wear and tear of tyres).

In fact, the system sturdiness enables to maintain the verticality of the wheel assembly excursion. The major defect of this system is given by the poor capacity of absorbing the unevenness of the road surface, and the poor road handling determined by the rigid connection of wheels onto the same axle.

Every Jimny mounts a differential gear while the central one is totally missing. So, when the all-wheel drive is engaged, traction is split 50-50 between the front wheel axle and the rear wheel axle. Since the all-wheel drive is not provided with the central differential gear, it can only be used on terrains with poor grips, namely mud or snow, but not on wet asphalt.

What is a differential gear for?

Consider a situation in which the car wheels can only rotate on the road, without slipping; this is an assumption that comes close to what should happen on the asphalt.

The differential gear is necessary to distribute the drive torque to the (driving) wheels, adapting the rotation speed of the drive wheels to the expected travel, a turn that in curve is different for each one of the four wheels.

Cars with single-axle traction only need one differential gear, which is located on the drive wheel axle and so receives one drive torque and distributes it to the two wheels, which when cornering will have a different driveability: this means that the internal wheel travels a “shorter” distance compared to the external wheel, and accordingly at a “lower” speed. For this reason, it will need less torque.

If not provided, the torque will be equally allocated (50%) between the two axles even if the distance travelled by the two axles will be different when cornering.

As a result, the recommendation is not to use the Jimny 4×4 system on asphalted roads, or in wet weather. The use of 4×4 is allowed as per manual on terrains with poor grip.

On low or very low grip roads, the idea is that the car should adapt to the terrain and the differential gear is “blocked” (this actually clears its function); this is just the usage situation of the off-road car. This is the situation that occurs when the all-wheel drive is activated on Suzuki Jimny (or anyway on those vehicles where no central differential gear is provided).

How to read the control unit and where to find it?

The ECU can be written and read by using the K-TAG, family 813, as follows:

-with positioning frame and illuminated support

If frame and illuminated support are used, you need:

In case of wire free:

The driver consists of 30 maps that are divided into the following categories:

This map shows the engine advance used by the vehicle in normal operating conditions; depending on the engine rev number and the engine load expressed as Load, the map unit of measurement is expressed in deg BTDC.

This map shows the engine limitation advance, or maximum advance values that a specific engine can reach so as to prevent any damage; this is expressed in degrees before PMS and at low engine revolutions and high load values. This map can also show some negative values meaning delays.

This map expresses the torque of a vehicle, based on the number of engine revolutions and on the accelerator %. Map values reach the maximum of 1.00 corresponding to 100% torque.

It shows the maximum torque delivered by the engine, and is expressed as a function of engine revolutions and load. The unit of measurement is given by the percentage (%) of Nm.

This allows the engine to exit the closed-loop operation condition (when injection is regulated to maintain lambda =1), for this reason carburation is rich with high engine revolutions and high engine load.

It is expressed in Lambda and works as a function on Load and engine RPM.

The driver contains different injection maps having a totally different shape. We can see some examples just below: each one of them works in completely different “operating status” or “situations”.

There is also a variable timing map with intake depending on engine revolutions and load.