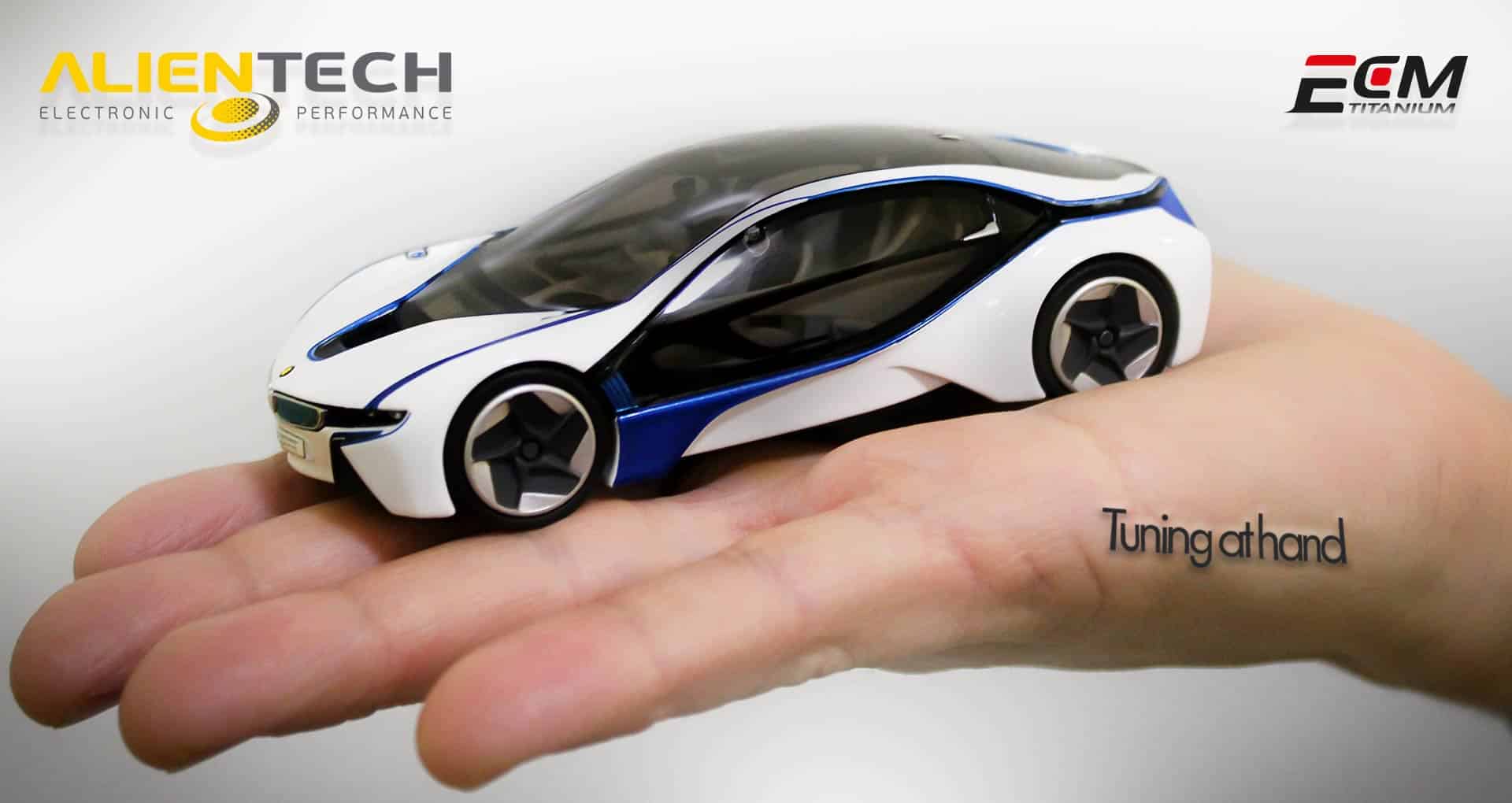 Posted at 08:06h in Tech Deepening by Alientech

Today’s focus in on a very special vehicle which does not certainly go unnoticed, catching everybody’s eyes thanks to its line and character. A very special car that is well worth discovering from the technical and mechanical viewpoint. We are talking about the new BMW i8 provided with a hybrid system and with a 1500 gasoline turbo engine managed by the ECU Bosch MEVD17.2.3

BMW i8 is the first model introduced in 2009 as BMW Concept Vision Efficient Dynamics, and its sporty and captivating design stems from the concept car BMW M1.

The electric engine is powered by a lithium battery unit, which makes it possible to reach up to 35 km (22mi) with the only electric engine. This sporty vehicle can reach 250km/h (self-limited) thanks to the ECU and 100km/h in only 4.6 seconds. All this is combined with minimal consumption since the vehicle can consume, under standard conditions, only 2.9L to cover 100km also thanks to its reduced weight of only 1500kg.

This concept car is available in four versions:

Below are some of the main features of i8

The real peculiarity of this vehicle is the chassis, which determines a particularly lower consumption compared to any other small car.

The LifeDrive Concept chassis is very simple and is specifically made for this concept car which is already a hybrid version. The chassis consists of two separate and independent horizontal modules, and the aluminium part directly integrates lithium batteries, driving system, structure and functions in case of collision. All this is combined with an ultra-resistant cell for the passenger made from carbon fibre reinforced plastic, also called CFRP.

The use of high-tech, lightweight and highly collision-resistant CFRP materials offers a 50% reduction in weight compared to steel and a 30% reduction in weight compared to aluminium, granting the same or higher safety level. This enables to offset the additional weight of the electric engine and high tension battery: the BMW i8 empty mass is in fact lower than 1490 kilograms.

The battery unit is located in central position, within the lower section of the vehicle, and this determines a low and central barycentre that enhances the level of safety.

A fundamental aspect in providing the extreme agility of the vehicle is the balanced load distribution to the axles: in BMW i8, weight distribution on front axle and rear axle is almost perfect in a 50:50 ratio. The unit comes with electric motor, gear box and power electronics mounted next to the front axle, which is driven by the electric motor.

In order to ensure that the supercharged internal-combustion engine delivers its power to rear wheels thorough a shorter route, it has been located on the rear side of BMW i8, together with its gear box.

Configuration is completed by locating the lithium-ion battery at the centre of the car, in a position slightly shifted forward.

The door frame consists of a CFRP support and an outer aluminium layer. Compared to a traditional frame, this enables to obtain a reduction in weight of about 50 percent.

The BMW i8 propulsion system incorporates BMW TwinPower Turbo & BMW eDrive technologies. In this way, the plug-in system combines the best of both types of engine: high potential to increase efficiency and the fascinating features of a sporty drive.

The internal combustion engine has been developed by BMW Group together with the electric engine, power electronics and battery.

BMW i8 is the first BMW series model incorporating a three-cylinder gasoline engine. The propeller is very compact and delivers a peak power of 170 kW/231 CV with 113 kW/154 CV per cylinder capacity litre; it owns the highest specific power ever obtained with a BMW Group propeller and so can reach the level of a sporty car engine and high performance.

The new three-cylinder propeller can be distinguished by its strong affinity with straight six-cylinder engines by BMW, which are known for their straight power delivery, vivacity and smooth operation.

Its technology includes a powerful supercharging system, a direct gasoline injection system provided with high precision injections located among the valves and a load control without VALVETRONIC throttle, which determines the stopless valve lifting in order to optimise the engine efficiency and quick response.

Roll torques provided for its special construction, are minimised by a counterweighted shaft while, at a low speed, a multiple-level damping element is integrated into the gear box ensuring the silent and regular running of the engine.

The BMW TwinPower Turbo technology and the low internal friction of the engine promote the efficiency of the propeller and its capacity to run at high speeds. The three-cylinder version develops a spontaneous reaction to every impulse from the accelerator pedal, quickly reaching its maximum torque at 320 Nm.

The second power source consists of a synchronous electric engine, specifically developed and made by BMW Group for BMW i8. It delivers a peak power of 96 kW/131 CV and an ideal maximum torque of about 250 Nm, already available when it is started from a still condition.

Progression is available up to higher load fields, even after the typical quick response offered by electric engines upon start-up. Thanks to the corresponding boost function, the electric motor supports the gasoline engine during acceleration.

In addition, the electric engine can be used only for electric driving at a maximum speed of 120 km/h, with zero emissions and in almost total silence for a distance of 35 kilometres.

The necessary energy is supplied by the lithium-ion battery mounted in a central position, in the underbody. The battery comes with a liquid cooling system and can be charged in less than three hours, using a standard electric outlet or in less than two hours at a public power station or even during the electric engine release. The high-voltage starter generator that drives the engine also operates as a current generator for the high-voltage battery.

The BMW i8 has different driving modes that can always adjust the power in an optimum way: COMFORT, ECO PRO and SPORT optimise the BMW i8 performance according to the driving situation: electric driving up to 65 km/h with an autonomy of about 37 km and super sporty extra-urban driving are also possible.

Half-way between them, there is the best integration of the two worlds: gasoline engine and electric engine always demonstrate that their technical symbiosis is never a compromise. By pressing the eDrive button, BMW i8 can be set to purely electric driving. The button can be activated in the COMFORT and ECO PRO mode. In the COMFORT mode with eDrive, the BMW i8 runs without the support of the combustion engine, almost to the end of the battery. eDrive enables to drive up to 120 km/h in purely electric driving. If the eDrive button is not pressed, the combustion engine will be already active at 60 km/h.

Where to find the control unit

How to read it

With the K-TAG tool and the more common Tricore activation, family 678, plugin 719 we can create a backup of the ECU and completely manage all the engine parameters.

EEprom: Inside the microprocessor

The ECU can be read via direct connection, using:

Let’s now analyse the main maps available inside the driver

The driver designed for this vehicle with 362CV 3 turbo cylinders, which develops 550Nm, contains 37 maps divided into the following categories:

Air Flow through the throttle valve

This map is used as calibration because it represents the values of the air flow measured by the MAF sensor, depending on the throttle valve percentage and the engine rev number; this map is useful if the tuner replaces the MAF sensor, in such a manner that the map as well as the ECU are recalibrated to make an analysis of the MAF efficiency.

These maps show the torque that the driver requires through the accelerator pedal based on the number of engine revolutions and the accelerator percentage (Driver Wish). Reported values are ideal as they can exceed real Nm values developed by the vehicle or a specific percentage, if these are expressed from 0 to 100%. The maximum real torque will be then limited by torque limiters.

This map shows the maximum torque limiter expressed in Nm, based on the number of revolutions in such a manner that the engine is protected. The limitation is fixed at 320 Nm as established by the car manufacturer.

This map shows the engine advance in a normal running condition of the vehicle, depending on the number of engine revolutions and the engine load expressed in %Air, and provides the correct value in deg PMS. This car also control the advance based on the specifications of fuel available in the tank.

Lambda for the Protection of Components

This map shows the calibration of an engine for injection control, when the vehicle runs in a protection mode, in such a manner as to protect the catalyser in case of too high exhaust gas temperatures, based on the number of engine revolutions and on the percentage of air entering the engine.

This map shows the end of limitation, expressed in engine revolution number, to limit the maximum rotation of the engine.

This map shows the opening width of intake valves, expressed in [mm] based on the engine revolution number and the percentage of air entering the engine: the highest the number of revolutions, the bigger the airflow and the more intake valves open.